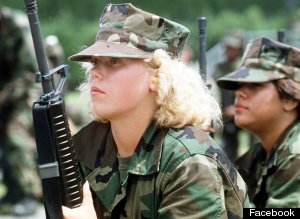 Male Marines listed being falsely accused of sexual harassment or assault as a top concern in a survey about moving women into combat jobs, and thousands indicated the change could prompt them to leave the service altogether. 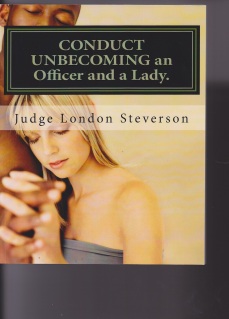 The anonymous online questionnaire by the Marine Corps surveyed 53,000 troops last summer, with the results provided to Defense Secretary Leon Panetta before he opened thousands of combat positions to women last week.

The Marine Corps released the results to The Associated Press on Friday February 1, 2013.

Among the other top concerns listed by male Marines were possible fraternization and preferential treatment of some Marines.

Respondents also worried that women would be limited because of pregnancy or personal issues that could affect a unit before it’s sent to the battlefield.

Military experts said the results were not surprising because the Marines have the highest percentage of males among the branches of the armed forces.

Some, however, said the survey shows the need for sensitivity training and guidance from leadership so the change goes smoothly, as occurred when the military ended its policy that barred openly gay troops.

“I think there is this sense among what I would imagine is a very small minority of Marines that this male bastion is under siege and this is one more example of political correctness,” said David J. R. Frakt, a military law expert and lieutenant colonel in the Air Force reserves.

Just as the Marine Corps adjusted to the end of “don’t ask, don’t tell,” despite being the most resistant among the military branches, troops will likely fall in line again with this latest historical milestone, said Frakt, a visiting professor at the University of Pittsburgh.

Marine Corps officials did not respond to a request for comment on the survey results.

Both sexes mentioned intimate relationships between Marines and feeling obligated to protect female Marines among their top five concerns about the change.

Female Marines also said they worried about being targeted by enemies as POWs, the risk of sexual harassment or assault, and hygiene facilities, according to the survey, which did not give specifics.

The women surveyed also expressed concern about acceptance and physical abilities if given a ground combat job.

About 31 percent of female respondents — or 1,558 women Marines — say they would be interested in a lateral move to a combat position as their primary job, and 34 percent — or 1,636 — said they would volunteer for a ground combat unit assignment.

Elaine Donnelly of the conservative Center for Military Readiness and a vocal critic of the change said the survey asked the wrong questions and should have been asking if troops favor it and whether it will make a more effective force.

The questionnaire also relied on the “mistaken belief” that training standards will remain the same, which Donnelly said is not realistic given the differing physical abilities between the genders.

She said the Pentagon is bent on imposing gender-based quotas that will drive down standards. Defense leaders say standards will not be lowered.

“The results that are being put out there are designed to manage public perception,” she said. “There is a lot about this that still needs to be discussed and it’s really not fair to the women who serve out there.”

The infantry side is skeptical about how women will perform in their units, and some positions may end up closed again if too few females meet the physically demanding standards of combat, said Gen. James Amos, head of the Marine Corps, who spoke to reporters Thursday at a defense conference in San Diego.

“I think from the infantry side of the house, you know they’re more skeptical,” Amos said. “It’s been an all-male organization throughout the history of the U.S. Marine Corps so I don’t think that should be any surprise.”

It will be up to the military service chiefs to recommend and defend whether women should be excluded from any of those more demanding and deadly positions, such as Navy commandos or the Army’s Delta Force.

Over the past decade, many male service members already have been fighting alongside women in Iraq and Afghanistan. Women who serve in supply units, as clerks and with military police have ended up on the unmarked front lines of modern warfare.

More than 150 women have been killed in wars in Iraq and Afghanistan while serving in support roles.

About 7 percent of Marines are female compared to about 14 percent overall for the armed forces.

Both sexes surveyed said getting women closer to the action will improve their career opportunities. 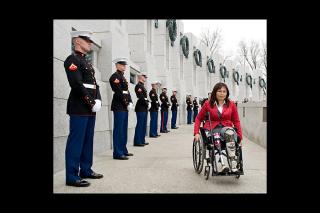 The Pentagon is pushing ahead with its campaign to move women closer to the battlefield, despite a series of sex scandals involving senior officers and a report showing an increase in sexual assaults among the troops.
At the dawn of the all-volunteer military force in 1973, women accounted for less than 3 percent of active-duty and reserve members. Today, 310,000 women make up about 15 percent of the force. In and around the Afghanistan War are nearly 17,000 women in uniform.
With the influx has come increasingly close contact between men and women — and a sharp rise in sexual misconduct. Military-wide, sexual assaults are up 22 percent since 2007, according to a Pentagon report. 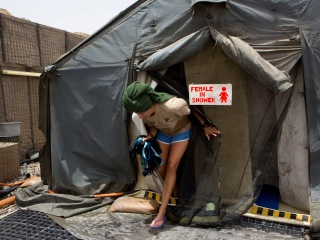 “The problem is getting worse. It’s not getting better,” said Elaine Donnelly, who heads the Center for Military Readiness. “Part of the reason is people don’t want to admit what everyone knows to be true.
“Men and women are human beings. They react to each other. The do things they are not proud of. Rank has nothing to do with it. It’s not solely a gender issue. Both sexes are involved. All ranks.”
In recent months, an Army general in Afghanistan was accused of forcing a female captain to engage in sex acts, and the Navy has fired commanding officers for sexual misconduct.
Even four-star officers are not immune. Marine Gen. John Allen, commander of all NATO forces in Afghanistan, is under a Pentagon investigation for an exchange of flirtatious emails with a married Florida socialite. 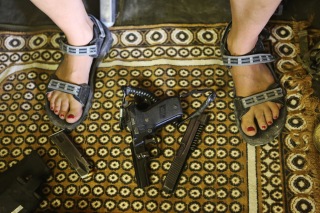 The Iraq and Afghanistan wars have pushed the sexes closer together than ever before in shared living quarters in isolated bases, as well as the close quarters of Navy ships and, now, submarines.
A Department of Veterans Affairs research panel survey found that about half of all women sent to Iraq and Afghanistan say they were sexually harassed, and 1 in 4 say they were sexually assaulted. The findings were based on surveys mailed to 1,100 women who had served in or near the two war zones, according to USA Today.
Meanwhile, most recruits begin military life in sex-integrated barracks.
“The only thing the military can do is try to encourage discipline instead of indiscipline, and try to avoid the kind of hazardous situations that just make it worse,” Mrs. Donnelly said.
One of the trends Mrs. Donnelly said is making things worse is the Army’s drive to put women closer to combat and, perhaps one day, in direct land combat.
Early last year, the Army began opening 14,000 combat support jobs below the brigade level, down to smaller units close to front lines.
In a more revolutionary move, Gen. Raymond T. Odierno, Army chief of staff, ordered a study to learn whether women can be assigned to direct land combat occupations as infantry and armor soldiers. 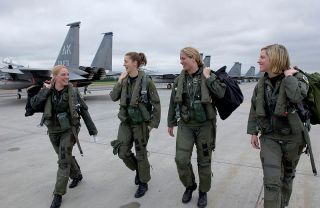 The Air Force and Navy removed most combat barriers in the 1990s. Since then, it has ballyhooed the methodical promotions of female generals and admirals to key commands.
The Army suffered through its worst known sex scandal in 1996 when 12 officers and enlisted leaders were charged with sexually abusing female trainees at the Aberdeen Proving Ground in Maryland.
Sixteen years later, the Air Force discovered the same type of widespread sexual abuse at Lackland Air Force Base near San Antonio. 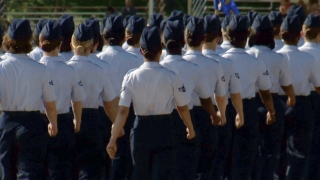 At Lackland, all enlisted recruits undergo an 8?-week boot camp under the wing of a mostly male staff.
More than 30 female trainees complained of sexual harassment, and even in-barracks rapes, by instructors. The Air Force fired scores of instructors. 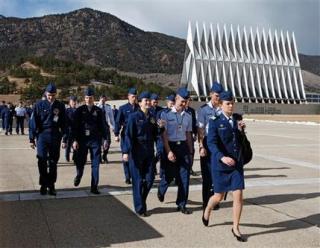 The scandal involving former Gen. David H. Petraeus, who formed a close relationship with his biographer in Afghanistan while in Army uniform and then began an extramarital affair while CIA director, has garnered the most attention. 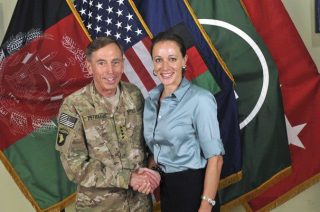 But the military branches have suffered through much more disturbing cases of misconduct.
The Army has charged a deputy commander of its storied 82nd Airborne Division with forcing a female captain to perform oral sex. Brig. Gen. Jeffrey Sinclair’s sexual relations with his subordinate went on for three years in the U.S. and on deployments to Germany, Iraq and Afghanistan.
Another former commander, Army Col. James H. Johnson III of the 173rd Airborne Brigade Combat Team, was convicted in June of having an affair with an Iraqi woman, aided by government cars and travel vouchers. A military judge fined him $300,000. His wife had turned him in.
Army Col. Avanulus Smiley was relieved of his command for committing adultery.
A ‘chilling trend’
Former sailors cannot remember an era when so many Navy commanding officers are being punished for improprieties with female shipmates.
Navy Times, an independent newspaper, has taken to publishing a running tally. As 2012 came to a close, the Navy had punished 40 commanding and executive officers, as well as senior enlisted personnel in command-type positions.
Several cases involved inappropriate sexual conduct. The Navy relieved Capt. Robert Martin, a ship commander, for having an affair with a fellow captain’s wife. Adultery is a punishable offense under the Uniform Code of Military Justice.
“The Martin case is the latest evidence that a small but significant number of the Navy’s best officers continue to engage in improper relationships,” Navy Times said. “At least seven other [commanding officers] have been relieved for adultery and inappropriate personal relationships since 2010.”
Not all cases are about men behaving badly.
The Navy fired Cmdr. Sheryl Tannahill as head of a Navy support center because she carried on an “unduly familiar” relationship — sometimes called fraternization — with an enlisted man.
Neal Puckett, a lawyer who specializes in defending military clients, has witnessed officers who grow so senior in rank that they think they are above the law. Mr. Puckett has taken an advisory role with the Navy in anticipation that the military will launch more sex-abuse prosecutions.
“Hubris, I think, is the word that best describes the condition,” he said. “Sometimes those very senior positions give men a greater sense of power and belief that they are indeed, and finally, masters of their own destiny. Not above reproach, but rather above scrutiny. The system promoted them to where they are, thus they are justified in all of their actions, even when they are abusing that rank and position to satisfy some of their more primitive needs.”
Sexual assaults have become such unwanted occurrences in military life that the Pentagon set up the Sexual Assault Prevention and Response office. It reports that sexual assaults have increased 22 percent since 2007.
The Army has issued a report that talks of a “chilling trend” of violent sex crimes growing at a rate of 14.6 percent a year.
Army figures show that reports of such crimes have nearly doubled, from 665 in 2006 to 1,313 last year. 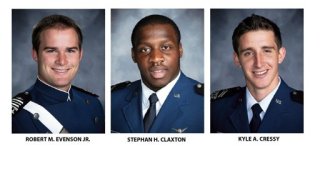 The storyline got worse Dec. 21, when the Defense Department released a report saying sex assaults at the three service academies increased by 23 percent in the 2011-2012 academic year. They grew to 80 cases, from 65 in 2010-2011. The alarming numbers were contained in the Annual Report on Sexual Harassment and Violence at the Military Service Academies.
“Sexual assault has no place in this department,” Pentagon spokeswoman Cynthia Smith said. “We take care of our people on the battlefield better than anyone else.
“We must extend that same ethos of care to combating sexual assault within our ranks. We have made progress in preventing and responding to sexual assault, but we are not satisfied and recognize there is much more work to do,” she said. “Our aim is to reduce, with a goal to eliminate, the crime of sexual assault from the armed forces.”
(By Rowan Scarborough)