(https://www.amazon.com/Judge-London-Steverson/e/B006WQKFJM)
Attorney Machen also defended the United States in a wide range of civil matters involving alleged age, race and sex discrimination, torts, and medical malpractice.
Ronald Machen is one of the nation’s leading trial and white-collar defense lawyers. His practice focuses on government enforcement actions, corporate and congressional investigations, and litigating civil business disputes. An experienced litigator who has tried more than 35 cases to verdict, Mr. Machen specializes in litigating complex criminal and civil actions. He also routinely helps clients navigate high-stakes, crisis situations that garner the attention of multiple regulators, enforcement authorities, Congress and private litigants. Prior to rejoining the firm in 2015, Mr. Machen served for over five years as the United States Attorney for the District of Columbia.
Prior to his appointment as US Attorney, Mr. Machen was a partner in WilmerHale’s Investigations and Criminal Litigation Practice, where he represented individual and corporate clients in the areas of white-collar criminal defense, regulatory enforcement, corporate compliance and complex civil litigation. Mr. Machen also served as an Assistant US Attorney in the US Attorney’s Office for the District of Columbia from 1997 to 2001, where he prosecuted matters involving bribery, mail fraud, government contract fraud, federal conspiracy, homicide, embezzlement and theft.During his career, Mr. Machen has been repeatedly recognized for his professional accomplishments. In 2015, he was identified as one of DC’s “Top Criminal Defense Lawyers” by Washingtonian magazine and also honored as one of the “100 Most Outstanding African American Leaders” for his contributions in the field of law by African Leadership Magazine. In 2013, he received the Equal Justice Award from the National Bar Association. In 2012, he was recognized as a “Visionary” by Legal Times for helping to advance the practice of law during his tenure as US Attorney. In 2008, The National Law Journal named him one of the “50 Most Promising Litigators in America Under the Age of 45” and also recognized him as one of the “50 Most Influential Minority Lawyers in America.” In 2006, the Washingtonian magazine named him one of DC’s “Top 40 Lawyers Under the age of 40.” 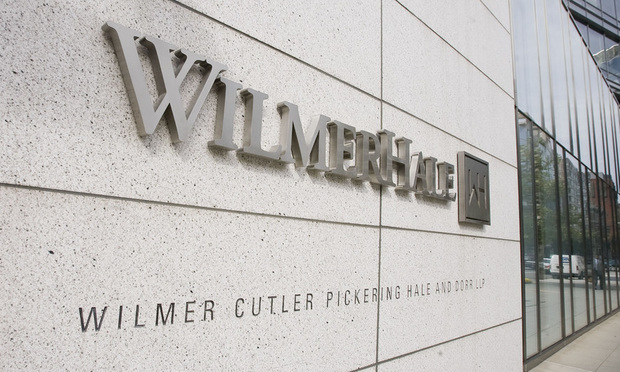 Ennis, a Wilmer partner in Washington since 2007, was nominated on Oct. 10. Her nomination is pending in the U.S. Senate. Ennis, according to her law firm bio, focuses on internal investigations of accounting conduct. A Wilmer lawyer since 1998, she has represented clients at the U.S. Securities and Exchange Commission and at the Consumer Financial Protection Bureau. Her compensation report covers income from last year up until the filing of the disclosure.

Ennis identified her anticipated partnership share at $250,000 to $500,000. She said she would receive a pro rata partnership share based on the value of her interests for work performed this year, up until her withdrawal from the firm, according to the “WilmerHale LLP Partnership Fixed Fee Agreement for Participating Equity Partners.” Ennis said she would receive a refund from her capital account, estimated at $500,000 to $1 million. She was not immediately reached for comment Tuesday.

Ennis said she will be eligible for an early retirement benefit from Wilmer. Ennis wrote in her ethics agreement: “The firm will pay the benefit to me annually, in monthly installments, for seven years following my separation from the firm. The amount will not exceed $175,000 annually, but may decrease should the firm not achieve certain income targets.”

Ennis identified four clients in her financial disclosure: Bank of America, JPMorgan Chase & Co, Citadel LLC and HSBC Private Bank SA. She pledged not to participate in any matters involving those clients for one year, unless she first obtains a waiver.

The Social Security Administration’s inspector general is responsible for monitoring the agency’s programs and operations for fraud, waste and abuse, along with notifying the agency and Congress of problems and recommending corrective actions.

This year, the inspector general’s office sent out a warning about a nationwide telephone “imposter phishing” scheme. “Our attorneys have worked closely with the internet search-engine industry to get in front of this issue, and their efforts resulted in a technology company developing a public service notice for its search engine,” the agency said in a semiannual report to Congress.

The inspector’s office has also expanded partnerships with states to sniff out fraud in federal benefits programs.