Video Hearings Are A Denial Of Due Process 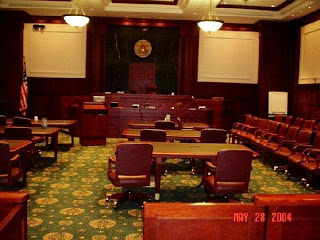 The agency denied the application on January 5, 2012, and Martinez requested a hearing before an Administrative Law Judge (“ALJ”).

After a video hearing on July 23, 2013, the ALJ determined that Martinez was not disabled pursuant to § 1614(a)(3)(A) of the Social Security Act and denied the application for benefits.

(NOTE: This writer believes Video Hearings are a Denial of Due Process.

Consequently, the ALJ found that Martinez was not disabled and that there were occupations available to him that would require only partial use of his right hand.

The Appeals Council of the Social Security Administration (A/C) declined further review, making the ALJ’s decision the final decision of the Commissioner of Social Security.

Martinez then sought judicial review of the ALJ’s decision.

After considering a Magistrate Judge’s report and recommendation and Martinez’s objections thereto, the District Court affirmed the ALJ’s decision and entered judgment in favor of the Commissioner. This appeal followed.

An individual who is disabled, and otherwise eligible based on income and resources, is entitled to benefits under the Social Security Act. 42 U.S.C. § 1381a.

To establish disability, “a claimant must demonstrate [that] there is some ‘medically determinable basis for an impairment that prevents him from engaging in any ‘substantial gainful activity’ for a statutory twelve-month period.’ ” Plummer, 186 F.3d at 427 (quoting Stunkard v. Sec’y of Health &amp; Human Servs., 841 F.2d 57, 59 (3d Cir. 1988)).

A claimant is unable to engage in any substantial gainful activity “only if his physical or mental impairment or impairments are of such severity that he is not only unable to do his previous work but cannot, considering his age, education, and work experience, engage in any other kind of substantial gainful work which exists in the national economy.” Id. at 427-28 (quotation marks omitted).

To determine whether a claimant is disabled, the Social Security Administration considers, in sequence, using a 5-Step Evaluation Process whether the claimant: (1) is engaged in substantial gainful activity; (2) has a severe impairment; (3) has an impairment that is the same as or equivalent to an impairment listed by the Administration as presumptively precluding any gainful activity; (4) can return to past relevant work despite the impairment; and (5) is capable of performing other work in the national economy. 20 C.F.R. § 404.1520; Brewster v. Heckler, 786 F.2d 581, 583-84 (3d Cir. 1986).

As noted above, the ALJ found that Martinez had a severe impairment, but not one that precluded any gainful activity, and that other work was available to Martinez in the national economy that he could perform despite his impairment.

The administrative record belies these contentions, and we find no fault in the District Court’s discussion of the ALJ’s decision.

First, the evidence that Martinez says that the ALJ should have considered was not part of the administrative record. Martinez attached two documents to his brief before the District Court that purport to show a diagnosis of rheumatoid arthritis from two of his treating physicians. Martinez did not present those documents as part of his case before the ALJ, even though the ALJ invited Martinez to provide additional documentation following the hearing. Consequently, we may not consider that documentation in our evaluation of whether substantial evidence supported the ALJ’s decision. See Matthews v. Apfel, 239 F.3d 589, 593 (3d Cir. 2001). Furthermore, that documentation post-dates the ALJ’s decision, and Martinez does not explain why he did not provide it earlier. Consequently, Martinez could not have satisfied the materiality and good-cause requirements to justify a remand to the ALJ to consider that new evidence. See Szubak v. Sec’y of Health &amp; Human Servs., 745 F.2d 831, 833 (3d Cir. 1984).

Second, although Martinez argues that the ALJ overlooked his subjective complaints, the ALJ’s written opinion in fact considered Martinez’s testimony and found it not credible to the extent that the medical evidence contradicted it. In over two full pages of discussion, the ALJ identified potential contradictions within Martinez’s testimony and medical evidence that was inconsistent with his subjective reports. That discussion was more than adequate to satisfy the ALJ’s duty to provide explicit reasons for rejecting Martinez’s subjective contentions. See Burnett v. Comm’r of Soc. Sec. Admin., 220 F.3d 112, 122 (3d Cir. 2000).

Overall, the record reflects that there is substantial evidence to support the ALJ’s determination that Martinez’s physical impairments did not match or equal the criteria for the relevant listed impairments necessary for a finding that Martinez was statutorily disabled. Although Martinez was able to present certain pieces of evidence that potentially supported his claim of disability, the ALJ identified “more than a mere scintilla” of medical and testimonial evidence to contradict Martinez’s potentially favorable evidence, and carefully explained how each piece of evidence supported the conclusion that Martinez was not statutorily disabled.

In addition, there is substantial evidence to support the ALJ’s finding that Martinez had the residual functional capacity (RFC) to perform light work subject to some limitations in light of his impairments. The ALJ cited specific items of medical evidence and points from Martinez’s testimony to show how Martinez was able to perform basic tasks (ADL) in his employment and in his daily life that were reasonably equivalent to light work that would be available to Martinez in the economy.

Consequently, we will affirm the decision of the District Court that substantial evidence supports the ALJ’s conclusion that Martinez was not disabled during the relevant time period.

FOOTNOTE.   This disposition is not an opinion of the full Court and pursuant to I.O.P. 5.7 does not constitute binding precedent.